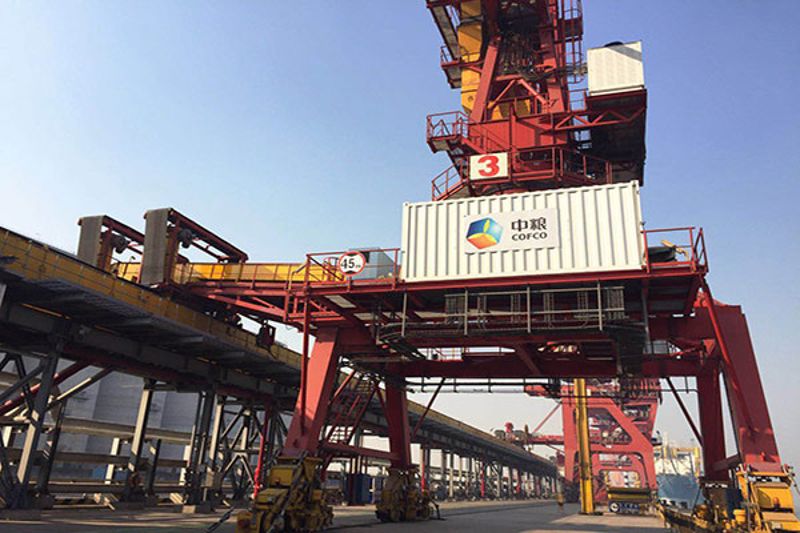 A machine is used for unloading grain at COFCO Excel Joy (Tianjin) in Tianjin, Nov 20, 2017. [Photo by Tan Xinyu/chinadaily.com.cn]

Editor's note: The article is part of a program to visit State-owned enterprises and better understand their study and implementation of the report delivered by Xi Jinping, general secretary of the Central Committee of the Communist Party of China, at the opening of the 19th CPC National Congress. And the first stop Monday is COFCO Excel Joy (Tianjin) Co Ltd.

COFCO Corporation, the country's biggest food supplier by volume, plans to increase the proportion of State-owned capital involved in agriculture, grain and oil businesses to 80 percent by 2020.

Wan Zaotian, deputy Communist Party secretary and vice-president of COFCO, said this at a meeting Monday in Tianjin, and he added that the other businesses will operate and do financing on their own within COFCO's regulated framework.

As to the core businesses of grain, oil, sugar and cotton, their market shares are expected to account for more than 15 percent respectively, according to Wan.

As one of the six large State-owned enterprises to pilot reforms in ownership, management and supervision, the Beijing-based conglomerate has gathered pace in mixed-ownership reform by restructuring, divesting nonessential assets and pushing core assets to go public since 2016.

Up to now, COFCO has had 14 of its specialized arms diversify their shareholding structures. And the company planned to carry out mixed-ownership reform in all of its 18 specialized arms by the end of 2018, Wan said.

COFCO hopes to bring in strategic investors consistent with its development strategy and promotion to achieve its goals, rather than those only focusing on short-term benefits, COFCO told China Daily Website.

From January to September, COFCO's operating revenue grew 6 percent year-on-year to 344.8 billion yuan, while its total profits were up 50 percent to reach 7.81 billion yuan, Wan said, adding that profit volume for this year is expected to be 10 billion yuan.